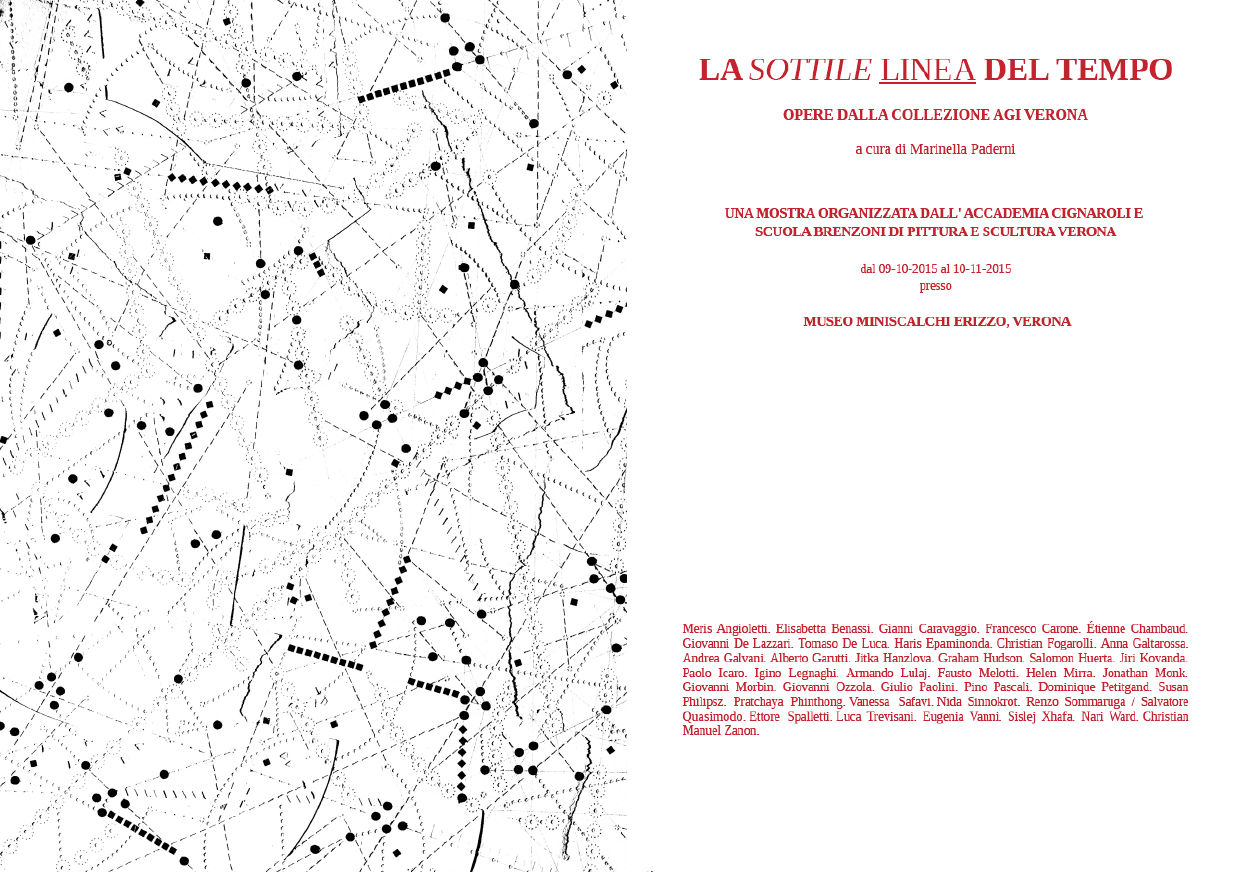 The show La sottile linea del tempo. Opere dalla collezione AGI Verona, curated by Marinella Paderni, will be inaugurated on Friday 9 October at 6.30 pm. It has been realised in collaboration with the Fondazione Museo Minischalchi-Erizzo, and organized by the Accademia Cignaroli e Suola Brenzoni di Pittura e Scultura Verona.

In its search for new ways of creating exhibitions based on a dialogue between the art of the past and that of the present, the Minischalchi-Erizzo museum in Verona has requested that the AGI contemporary art collection be placed in a relationship with its own collections of antique art and thus exhibit a significant group of contemporary works among the paintings, sculptures, reliquaries, furnishings and books inside the museum. This meeting of visions, sensitivities, and different historical contexts has given rise to a curatorial project that examines the modern concept of a universal museum (the producer of new differences beyond historically recognisable differences) and the role of art collections today. Active expression of non-linear historical time and of a transversal cultural memory, and receptive to differences, art collections allow the appearance of what is new on the basis of increasingly free, profane and extraordinary connections, ones that lead to heterocrony – the assembling and stratification of forms that come from other places and times.

“The difference beyond difference” has been chosen as a key to the analysis of the relationship between the old and the new. The forty works from the AGI Verona collection are to be seen in the museum in new combinations with antiquity: at times for symbolic associations, for aesthetic assonance or for anthropological contrast; at other times for seeing antiquity better through the magnifying glass of the new (and vice versa); and, finally, for showing the subtle line that time draws between us and things, a line that is always indissoluble and infinite. “Museums produce… the effect of presence, the appearance of life. Life really seems alive only from the viewpoint of museums because, once again, only in a museum is it able to produce new differences, differences quite apart from the differences that are emerging here and now”. (Boris Groys, Art Power)